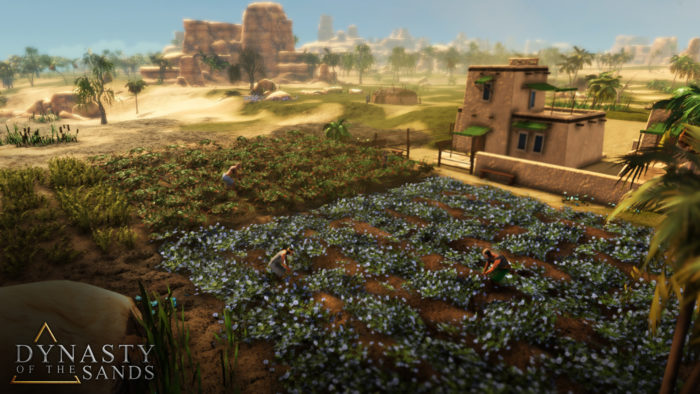 Today we’re going to talk a little about farming in Dynasty of the Sands (DotS), why it’s important, and the effort we’ve put into the Farming Systems to make it more enjoyable for the player.

Farming was a part of human civilization long before Ancient Egypt, with some farms being established as early as 10,000 years ago. However, the Egyptians made many technological leaps throughout the ancient period.

DotS has no fixed time period; instead, technologies from later in the Egyptian dynasty are discovered as the player progresses through the game.

The players first fields will be ploughed laboriously by hand, taking precious time, and therefore resources.

With progression and animal husbandry, an ox-drawn plough can make light work of your fields.

Let’s take a look at how farming takes place in-game. There are 2 types but today, we’ll only be covering crop farming. For this we’ll need a farmhouse; a simple affair of mud and brick will suffice for now. Here, our loyal subjects can take jobs as farmers.

First we will select a crop from the seeds we have available and draw out an area for our field.

Your farmers will head to the fields during the growing season. Watching the farmers, you will see the step by step process of toiling the land.

First, the farmer will plough the field row by row. This is done with a hand-plough for now; later in the game, oxen will be available for help with farming. Each furrow is dynamically dug out in real-time, to give the system an extra touch of realism.

Next, the farmer will walk up and down each furrow, planting seeds as they go.

With the ploughing and planting complete, your farmers will begin to tend the crops. This growth stage may be lengthy depending on the crop, the farm, and your technologies.

Finally, you have a glorious field of crops! It’s time for the harvest; farmers will cut each plant one by one, before bringing the bounty back to the farmhouse for collection.

During the flood season, no crops can be grown. This can be a trying time for players who’ve not managed to grow enough resources to last!

During both the growing and flood seasons, farmers will have downtime, so your farmers will automatically help out with nearby construction, and visit the sites around your city. But more on this in our Villagers Update Dev Blog.

As you grow bounties of crops season after season, it would be wise to rotate your plants, as odds of crop disease increase without this precaution.

Thanks for checking out Dynasty of the Sands, you can find our Steam Page here with lots more info:  https://store.steampowered.com/app/1143070/Dynasty_of_the_Sands/

We’re really excited to get your thoughts and feedback, they help us shape the development of the game.